If you’re looking to purchase a ceiling fan for an 8 foot ceiling, you need to make sure to choose a fan that is suitable as some fans cannot be mounted close enough to the ceiling.

Belelow you can find our top picks for the best ceilings fans for 8 foot ceilings. We’ve tried to include as much useful information as possible from features and specs to helpful tips.

The Harbor Breeze Mazon is a popular contemporary flush mount ceiling fan with a height of 12″ and diameter of 44″. It has a 3 speed reversible motor, LED opal glass kit and includes a remote with wall cradle.

Owners of this fan like how quiet it is, how low profile it is, and the fact that there aren’t pull chains dangling down (great for 8 foot ceilings). However, the fact that there is no pull chain means it’s super important not to lose the remote! Whilst it’s great the a remote and wall cradle is included, unfortunately it comes it quite an ugly beige color. 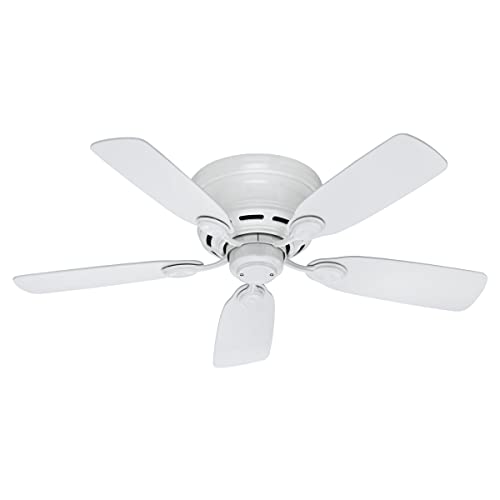 The Hunter Low Profile IV is a 42″ ceiling fan with a height of 9″. It has a 3 speed reversible motor and is operated via pull chain. It’s compatible with universal remotes but doesn’t come included with one. This fan doesn’t included a light kit but it is compatible with certain light kits.

What users like the most about this fan is the reasonable price, how quiet it is, how low profile it is, and how much air it moves. Some users have had problems with the edges starting to swell in humid environments, so you might want to regularly wipe it down if there’s high humidity to prevent this.

Something worth noting is the size of the housing on this fan. It’s larger than the housing on many ceiling fans. This is good in that it provides a really sturdy base for the blades, but it does mean it isn’t the most sleek looking fan. 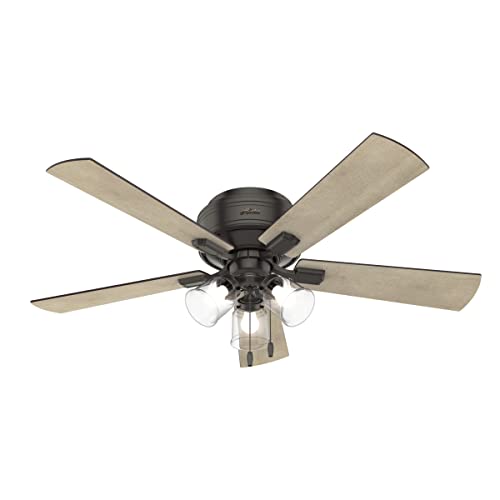 The Hunter Crestfield is a 52″ farmhouse fan with a height of 15.06″. It has a 3 speed reversible motor and includes a dimmable LED light kit. This fan is operated via a pull chain. It doesn’t come included with a remote but is compatible with universal remotes.

Most users are generally please with the style of this fan, how quiet it is, the fact that the lights are bright, and that it’s reasonably easy to install. However, some users found the lights to be too bright and found they had to replace the bulbs with some which aren’t as harsh.

Another point worth noting is that although this is a low profile fan, it is taller than some of the other fans on this list, and it also operates via pull chains, so you might find it gets in the way a bit more compared to other options. 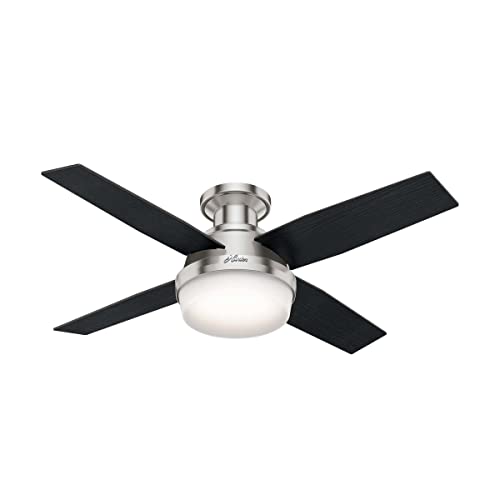 The Hunter Dempsey is a 44″ modern ceiling fan with a height of 12.5″. The Amazon page lists this fan at 11″ in height, but a few users have posted photos showing the fan actually sites at 12.5″. Not a huge difference, but it might be important when installing on an 8 foot ceiling. It has a 3 speed reversible motor, dimmable LED lights, and operates via the included remote.

Users generally like the style of the fan, how quiet it is, the airflow, and the bright bulbs that are easy to replace if you don’t like how bright they are. The included remote is a nice touch which many fans don’t have, however, it is quite an ugly looking remote unfortunately. This fan only operates via the remote too, so you’re going to have a problem if you happen to lose it. Based on user reviews, this isn’t the easiest fan to install either.

The Minka-Aire Traditional Concept is a 52″ ceiling fan with a height of 11″. It’s suitable for outdoor use in covered areas like porches. It has a 3 speed reversible motor, dimmable LED lights, and is operated via wall control. It doesn’t include a remote but is compatible with universal ceiling fan remotes.

What users most like about this fan is the sleek design, how quiet it is, how much air it moves, and the fact that there are no dangling pull chains which can be a nuisance, especially for 8 foot ceilings. However, this ceiling fan is quite a bit more expensive than other options, and it would be nice if it came with a remote control considering the price tag.